A great believer in making the most of a bad situation, first time author Michael Banks has written a book about his journey from diagnosis to kidney transplant.

Michael lived and worked in America for over 28 years but chronic kidney disease and its subsequent treatment turned his life upside down. 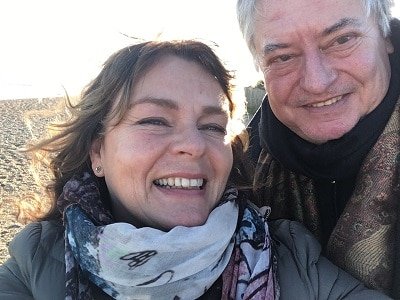 “To say the news came as a shock would be an understatement, he said, “I wrote ‘Gotta Kidney?!’ because not only did I want to record all the positives that occurred because of my illness, I also wanted to share my story, so others could benefit from it.”

“When people embark upon the kidney disease journey they don’t have a road map to tell them what to expect and they may fear the unknown. My book is not a medical journal, but it does at least bring to life one person’s experience of the journey. I hope it will give people hope and courage and reassure them that they will probably be alright in the end. It will remind them that there are people around who love them and want to help.”

“At the end of it all you might even be a better person for the experience.”

Michael’s saviour was his partner, Karin Jordan, who became a living donor and generously gave him one of her kidneys.

He has given a chapter in the book to Karin who describes quite honestly how hard she found the situation.

In the book she says: “Family members were very sceptical and I had friends advising me to not go through with it. I went through stages where I was really not sure if I wanted to do it at all. I was in L.A. all on my own, feeling very vulnerable and scared, having all these tests done.”

However, after much deliberation, Karin made her mind up to become Michael’s donor and her contribution to the book offers an insight into what’s involved in becoming a live donor.

“I am still living life to the fullest and do not have any regrets whatsoever,” she adds.

Michael has agreed to donate 15 per cent of the profits from the sale of his book to Kidney Research UK.

“Gotta Kidney” is available on Amazon in both paperback and Kindle versions.