A woman who says lockdown changed her from being bright and bubbly to feeling anxious, took her first cautious steps outdoors to raise money for Kidney Research UK, in a social distanced charity walk with her family.

Kathryn Croker, 34, from Northamptonshire has a rare kidney disease and before lockdown was living a vibrant life thanks to a kidney transplant from her dad, a living organ donor. 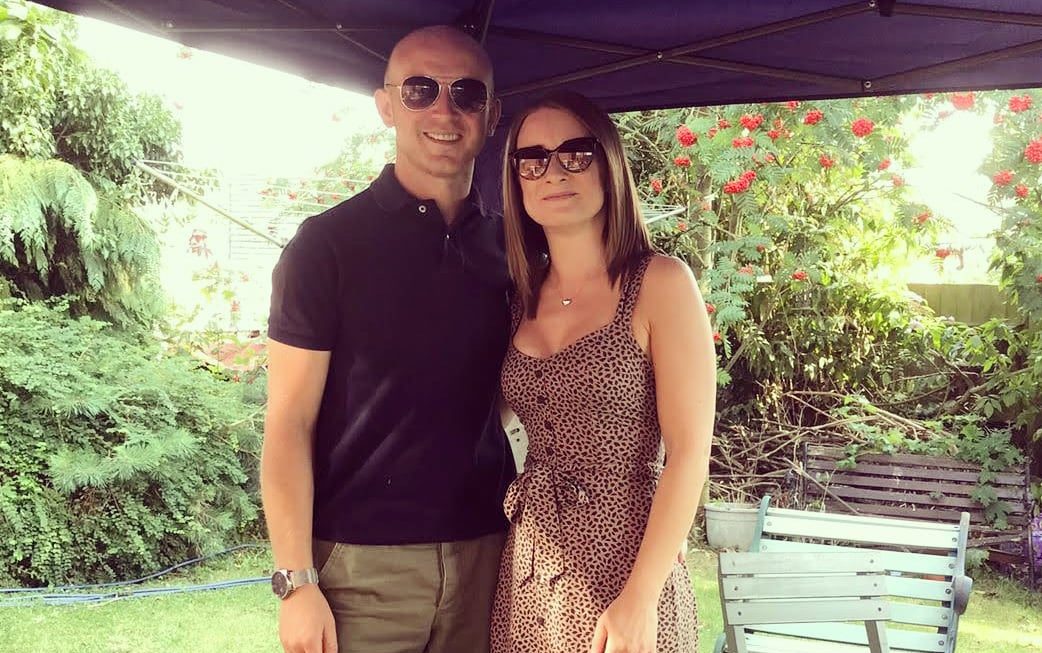 Kathryn Croker with her husband Luke

During lockdown her husband moved out and at one point even lived in the garden shed to help protect her.

Desborough-based Kathryn has Henoch-Schonlein purpura, also known as IgA vasculitis HSP, which makes blood vessels bleed under the skin. She was diagnosed when she was 12 years old. Since then she has lived a rollercoaster of devastating ill health until her kidney transplant in 2013.

“I have had to fight for my health for so long I’ll do anything to protect it, and unsurprisingly the pandemic has made me feel vulnerable.

“Before coronavirus hit I was always out doing things, socialising, and I loved my job in retail working with the public. Now I’m scared to be around people. I’m scared to drive. It’s like Covid-19 has changed me.

Husband moved out to protect her during lockdown

“My husband Luke decided to move out in March and was fortunate to live with wonderful friends. He was so worried about picking up the infection and making me ill. He would pop over and we would talk through the window. After a couple of months, he isolated in our garden shed for two weeks by converting it! He came home properly in June and has been shielding with me.”

Kathryn added: “Until the fundraising walk, I hadn’t been out properly since I left work on Friday 13 March to shield due to anxiety about the virus, I didn’t even go in my garden for 10 weeks as I was too scared! Being told that you’re clinically extremely vulnerable despite feeling well is terrifying.

“Every year we go out to celebrate the day my Dad donated his kidney to me - our kidneyversary, but this year I celebrated through my living room window with my parents. It was a very different seventh  kidneyversary but we were thankful we could do something.

“The first time I left the house was to go to my parents’ garden in August for my Dad’s birthday. Even that made me nervous. I know I need to re-integrate into society, but it feels scary.”

Kathryn was in the first week of year 8 at secondary school when she fell sick. She didn’t go back until year 9.

Missing a year of secondary school was difficult

At 12 years old most children with Henoch-Schonlein purpura recover. “It is rare, but some people get worse. Unfortunately, I was that person,” Kathryn said.

“Initially, I had a rash on my legs which looked a bit like insect bites, but it didn’t go away when I pressed it. The doctor sent me to our local hospital with suspected Henoch-Schonlein purpura. They prescribed antibiotics but nobody really knew what it was – we had to do a lot of research ourselves.

“Then I got poorly with painful joints, I was bed-bound for eight weeks, Dad had to carry me to the toilet as I couldn’t walk, I had terrible stomach pains and the rash just wouldn’t go away.”

Then a blood test showed her kidneys had failed and she was rushed by ambulance to Great Ormond Street Children’s Hospital (GOSH).

“I was treated with plasma exchange, dialysis, toxic drugs and a vast array of medication. My kidney function was critically low when I was admitted but I was incredibly lucky to leave with around 40%. I went to GOSH every week for appointments; it’s only now, I realise how hard it must have been for my poor parents.

“When I went back to school, I’d missed a whole year and at 13 that is a lot. I’d changed, I’d put on weight from steroids, it was a difficult time, friendship groups had moved on.”

Kathryn sat GCSEs, A levels and went to Sheffield Hallam University and always kept a close eye on her health, but would often get tired. Then in 2012 she got poorly again. She was swollen and exhausted, sleeping for 13 or 14 hours a day. She had already experienced constant chest infections, pneumonia and kidney infections. Kathryn’s parents were tested to be donors, luckily both were a match and her dad underwent tests throughout 2012 and 2013 to ensure he was fit enough to donate.

Kathryn Croker with her dad Kevin

Life changed after kidney transplant from her dad

In February 2013 she had emergency dialysis with a dialysis line in her neck. Her kidney function had fallen to just 4%. She was on dialysis for three months.

“I had ignored warning signs, but I had gradually become ill, so didn’t notice and was in denial of how bad it was.

After her transplant in May 2013, Kathryn said the difference was amazing.

“I am so much better. The kidney from my dad started working immediately. Sometimes I feel tired, but I live a much better life. I almost can’t remember how it feels to be well as I was so young when I became poorly, I certainly can’t remember what a normal level of tiredness is!”

Kathryn must take medication every day for the rest of her life and will need more kidney transplants in the future.

“Dialysis and transplant won’t cure kidney disease, but they are the best treatment option for a better quality of life,” she said.

Fund raising walk is first time out after lockdown

Kathryn walked for Kidney Research UK with her husband Luke and members of her family. They took a route across seven bridges over the River Ise around Rushton, the village where she grew up with her mum Anne and dad Kevin Abraham. They arranged their own social distance version of The Bridges Walks, a popular event organised by Kidney Research UK that were cancelled due to Covid-19.