What are the causes

There are three main types of cells in the blood:

A full blood count (FBC) is a laboratory blood test to measure the amount of haemoglobin and the numbers of red cells, white cells and platelets in the blood. It is also used to check the size and haemoglobin content of the red cells.

Anaemia can occur in many diseases and for many reasons, but common causes include:

When does anaemia affect kidney patients?

Mild anaemia can occur in people with stage 3b chronic kidney disease but it usually only becomes a significant problem at stages 4 or 5.

A shortage of erythropoietin is the most important factor, but other causes can contribute to the development of anaemia:

Treatments for anaemia in kidney patients

Treating anaemia by increasing the amount of haemoglobin in the blood helps to restore energy, improve stamina for exercise, and may help improve other problems, such as problems with sexual function.

Iron concentrations are often low in people with kidney disease either because their diet doesn’t contain enough iron, or there’s something wrong with how the body absorbs iron from the food as it is digested. Extra iron is given (either in the form of iron tablets or intravenous iron injections) to provide enough for normal production of red cells and to reverse or lessen the anaemia.

In the past, blood transfusion was the only really effective treatment for renal anaemia, but it had a number of problems:

Since 1985 when artificially produced erythropoietin (EPO) became available it has been a very successful treatment for renal anaemia. It replaces the erythropoietin that healthy kidneys would be producing and needs to be given by injections every few days or weeks. In people receiving haemodialysis, the injections are usually given into the machine. In people not on any form of dialysis and those on peritoneal dialysis, the injections are normally given under the skin, like insulin.

Anaemia in people with kidney disease often requires a combination of additional iron (either in the form of iron tablets or intravenous iron injections) and EPO injections. EPO speeds up the production of red blood cells in the bone marrow, but this takes time, so, it can take several weeks for treatment to work.

Side effects are rare but some are important, for example:

The best level for haemoglobin if you have kidney disease is probably low-normal or a little bit lower than normal. This relieves the symptoms of anaemia without causing complications.

If you have been diagnosed with anaemia and have any questions or concerns about your condition don’t hesitate to speak to your GP.

Worried about your kidneys?

Find a different condition or symptom

A major study funded by Kidney Research UK has been investigating the use of intravenous iron to treat anaemia. In results recently published, the trial demonstrated that giving patients on haemodialysis a higher dose of iron reduced the risk of death, hospitalisation for heart failure and other major cardiovascular events.

This is a major step forward and is likely to impact how haemodialysis patients are cared for across the world.

Join our Kidney Voices for Research network and get involved in the latest research into the causes and treatments of kidney disease. 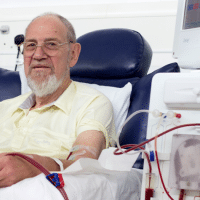 "This is the first clinical trial I’ve been involved in and I would definitely recommend it to others. It might not benefit me but if I can help someone in the future it’s all for the good"